Autoexpo in Delhi is the most happening place for all automobile enthusiasts around the world. Most of the cars, bikes, tyres, oils, and accessories companies participate in the Autoexpo. It takes place every alternate year.

2016 Autoexpo was the most memorable trip for me because it was my last road trip with Dilip Bam sir. Bam sir was my guru, my inspiration.

Bikeguru Dilip Bam, Dibyendu Joardar, and I went to Delhi by air to visit Autoexpo on 3rd Feb 2016. Our return journey was more exciting because we planned to drive back in TATA Bolt. The media vehicle was provided by TATA Motors.

On 04-Feb-2016 we received well serviced TATA Bolt at our place in Delhi. The red colour model looks attractive and was very photogenic.

We planned to start for Pune on 07-Feb-2016, but before leaving Delhi, we planned to visit Murthal for especially eating Aalu Paratha. Murthal is approximate 50 km from Delhi towards Ludhiana. I had tasted Murrthal’s Aalo Paratha and shared my feedback to Bam Sir and Dibyendu Sir after listening to which no one was willing to leave without tasting this Aloo Paratha.So, on 07-Feb afternoon we started from Delhi, by evening we reached Murthal. We halted at No.1 Ahuja Dhaba. Our order was fixed. The aalo paratha came with White butter, green chatni and spicy mirchi. We ate until we received the tank full signal from our stomach.  We halted at the dhaba for approx. 2 hours. After paratha, we all had tea, twice as by that time it was dark and we all were sleepy. So it was better for us to take a hotel and spend the night there only and hence we decided to halt.

The next day 08-Feb at around 8 am we started from the hotel towards Jaipur. The route was from Delhi only. We crossed Delhi and took the National Highway 8. The distance of Jaipur from our hotel was around 350+ km. We had no time limit and Bam sir did not like fast cars until it was him who was driving. So I was driving between 80-100 kmph. The motive was to enjoy the road trip. The music system of the TATA Bolt was awesome. I had already taken a pen drive full of music as per my choice. My music choice is totally different from my remaining two co-passengers.

In Jaipur, our plan was to stop at the Jaipur bypass, near Ajmer road. Our common and very dear friend Ravi Verma was coming to meet us. I called him around 2 hours before reaching the meeting place. As decided, we were meeting at some tea-shop for a maximum of 30 mins. As per our schedule, we met Ravi, we all were excited as we were meeting him after a long time. During the tea break, Dibyendu Sir asked Ravi if he could quickly guide him to a nearby Nikon showroom. Actually Dibyendu Sir forgot the Nikon charger in Delhi and our trip was long and without a camera, he was not comfortable as he is very passionate about photography. So, quickly we went to a nearby shop which was approximate 10 kms from the highway. He bought the charger quickly and we went to Ravi’s place for some refreshment as it was near to that place. When we reached home, Dibyendu Sir was exited to charge his camera battery as it was completely down.

SHIT…SHIT… we hear a loud sound from Dibyendu Sir. I and Ravi rushed at him to see what happened. OMG the charger was not working. We were already 2-3 hours late as per our decided schedule. Ravi called the shop for replacement but found it was closed and it will reopen again the next day at 11 am.

Dilip Bam sir was chilling at that time because he was not at all worried about the camera. He was having his small digital camera and was happy with that. He wasnt very camera friendly.

At that moment we had only one option, to stay the night in Jaipur at Ravi’s place. Bam sir also became happy as his wife was in Jaipur at that time. We dropped Bam sir at his wife’s place at around 7 pm.

I have done my graduation from Jaipur and stayed in the city for 3 years, so I was quite aware of the city. We went to MG road for dinner and of course Chicken was on the menu for three of us. We were tried, so after dinner, we directly went to Ravi’s home.

The next day we woke up early, we got ready by 10 am. Ravi’s mother had prepared breakfast for us. I loved the tea she made. It was too good. I consumed 2 cups.

Our plan was to exchange the charger and then pick Bam Sir, as he was staying near to the highway. But on pleasure road trips, plans don’t work. After replacing the charger, Dibyendu Sir charged his camera for an hour at the same shop. Then he became excited to click a few city shots. He couldn’t control the hidden photographer within him. We went to Hawa Mahal, Amar Jawan Jyoti, Bapu Bazar, and a few more nearby places. It was noon by the time, we planned to leave Jaipur. We were almost 24 hours behind our unplanned schedule.

On 9th-Feb, we took the NH 48 route towards Ajmer, Beawar. Thou it was the dinner time,  we halted at Beawar for a tea break. My father had worked in Shree Cement, Beawar and I have spent my childhood in this town. So to recollect good memories, we all went to Shree Cement Colony for a small visit. It was around 7 km from the highway. I went to the same apartment where I was staying earlier. After recollecting memories, we started again for the trip. Our next halting destination was Pipliyan Kalan. My close friend, my mechanic is from this small town. Suresh Kumawat, he stays in Pune but his native place is  Pipliyan Kalan which is approximately 200 km from Jaipur.

Before 20km from Pipliyan Kalan, there is a very small town named Bar, this town is famous for Ghevar sweet. New Jodhpur Sweets and Namkeen, is the shop in Bar which is open for 24 hours. Everything the shop sells is well known and super tasty. We reached the shop at around 10:45 pm. We had Pyaj Ki Kachori and I packed 5 kg Ghevar sweet. Quickly we left the place for  Pipliyan Kalan.

Suresh’s parents were aware that we are going to Pune from the highway which is 1 km from their house. So, our dinner was already fixed. Unfortunately, we were quite late as per the timing of their dinner. We reached at around 11:30 at Suresh’s place. The pure homemade desi food was ready for us. As we had plans to do the night drive, I had very less food. Dibyendu sir too preferred the same. It was a heartbreaking situation to leave the awesome food. After dinner, we had a cup of tea and we left for Pune. We were aware that the journey was long and we had no plans to stay at night anywhere else.

We started again at around 12:30 am. The roads were empty. Only our Tata Bolt was visible. This gave super confidence to Dibyendu Sir to drive the car.

He knows how to drive but didn’t have much practice. I also thought it’s a good chance to give him the Bolt as the roads were empty. Dilip Bam sir was not happy with my decision as he was worried about the consequences of a new driver on the highway. Dibyendu Sir had a valid Driving Licence so why not practice as there were no vehicles on the road. This was the best opportunity.

We exchanged our seats. Dibyendu Sir started the drive. The music was on, the climate was cool and I was now feeling sleepy.

After an hour I and Dilip Bam just woke up in shock. We thought it was an accident. But we were surprised when we saw Dibyendu Sir just changed the lane drastically as there was a vehicle coming from the behind. As expected Bam sir shouted with few desi galis to Dibyendu Sir. I and Dibyedu sir are used to hearing these words from Dilip Bam sir. Bam sir told me to drive back but I requested Dibyendu Sir to drive as he was quite excited and this happens. He drove the Bolt for more 2-3 hours till we halted for a small break.

Dilip Bam Sir prefers to travel by bike but as we had visited Auto Expo and had luggage so we planned a road trip in a car. One of the reasons for the bike is Cigarette. He loved to smoke a lot and I am a non-smoker. This combination is difficult to travel on the same car. Bam sir was 68 years old during this road trip. He doesn’t like cold. I told him not to smoke in the car. We decided whenever he wants to smoke we will take a break. But at every half, an hour was delaying the trip. At night, he argued to smoke in the car. I was not comfortable with it as I was driving the Bolt. So, I got an Idea. Whenever he lightens the cigarette I opened all the windows. He was feeling cold. I told him to stop smoking and I will close the windows. I did it 3-4 times. Later he decided to sleep than smoking.

We reached Ahmedabad on 10-Feb morning. We had breakfast near the highway. We halted there for an hour and then started again.

I met my dear friend Varun Garg in Vadodara. He used to work at L&T which is just next to the highway. Varun is my childhood friend, we halted there for an hour.

We kept on moving towards Pune now. All of us were now eager to reach home ASAP. During the day time, we had switched on the AC. The AC and music systems of all TATA vehicles are very good. We had kept the temp at 20 at level 1. It was enough for us during the day time.

We planned to have lunch once we enter Maharashtra. We drove at a nominal speed between 80-100 kmph.

Our schedule was to reach Mumbai in the evening, so I called my friend  Nilesh Telkar to meet near the hotel Fountain which is a meeting destination of bikers in the outskirts of Mumbai. Due to a delay in schedule, we met Nilesh and other bikers at around 11 pm.

We had tea and a discussion for an hour. We were tired so did not halt for more time. Now the Final destination for Pune.

This 170 kms was the most difficult phase. It was a late night, we were tired, not willing to listen to any music. I was just willing to enter my bed for a long sleep.

Finally at 3 am we reached Pune. First I dropped Dilip Bam sir at his place then Dibyendu sir and finally, I reached my place. We all live close by so quickly I reached home.

The trip was awesome. This trip will be very special for me because it was my last road trip with Dilip Bam sir.

I thank Tata Motors for providing us with a very comfortable, reliable, and spacious vehicle, TATA Bolt. 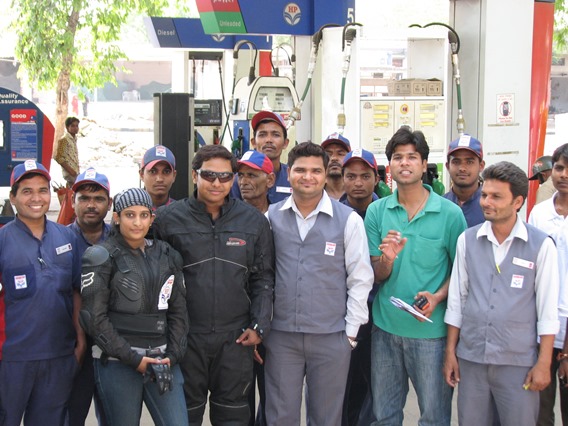 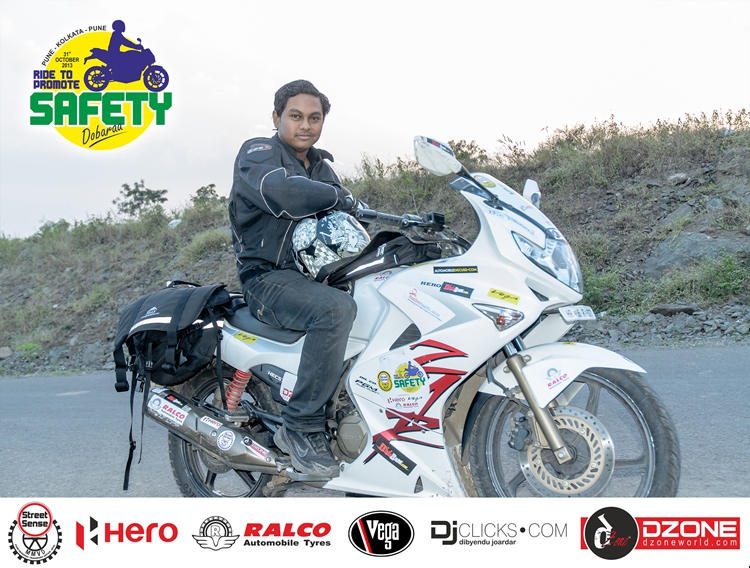